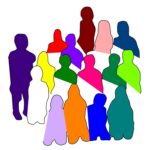 A retrospective is a short and intensive session where the team decides on the few vital actions that they will do in the next iteration.  There are many different retrospective exercises that they can use to find those actions. The trick is to define the actions in such a way that it stays in the minds of the people, and keeps popping up whenever relevant during the iterations. It has to stick.

What makes change stick? Malcolm Gladwell talks about the tipping point, and the stickyness factor. You need people with a diverse set of social gifts, connectors, mavens and salesman as Malcom calls them, to have lasting change.

Agile teams are multidisciplinary and to get work done it should be a diverse team. A diverse team is capable to define innovate and lasting solutions to problems, actions that have a higher chance to really solve problems forever.

What if you have a mono-disciplined team? For instance a team with only developers and no testers, or a team which only knows about one technology? Well, it might still be a diverse team, depending on who’s in there, and which soft skills they have. Having multiple disciplines enables teams to deliver end to end solutions, while diversity empowers teams to improve. The two can (and probably should) go together, to have a team that keeps getting better in getting the job done.

Having a diverse team is a foundation to have better actions coming out of the retrospective and having them successfully done, to makes changes from retrospective actions stick.

What you can do to increase diversity:

Diversity doesn’t come for free. It’s an investment which require perseverance and a mindset where people strongly belief that having diversity leads to a healthier organisation with better results. Which it does!

How do you increase diversity to make changes stick in your organization?