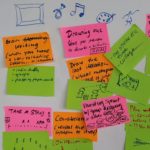 To truly understand how a team is doing you need to involve all team members in the agile retrospective. In almost all teams there are members who find it difficult to speak and tell about their experiences or views on a topic. They can be shy, introvert, and feel reluctant to interrupt people who are speaking. With a non-verbal exercise you can get input from every team member.

Ideas and techniques for non-verbal exercises

We did a session at the gathering where we collected ideas using sticky notes (which is actually non verbal too):

Here are some techniques and ideas that can be used in non-verbal exercises:

There are techniques that can be used in retrospective where people are speaking to include people who often remain silent. These kind of techniques, although not truly non-verbal, also popped up in our session at the gathering:

The Retrospective Facilitators Gathering is a yearly Open Space conference by and and for experienced practitioners in agile retrospectives. People from all over the world come to this gathering to share experiences and ideas and to learn from other facilitators. The 2016 edition, which was my second one attending, was held in Sagres, Portugal. The RGF 2017 will be held in the USA, RFG 2018 will be in the Netherlands.

What are the techniques that you use to do non-verbal exercises in your agile retrospectives?