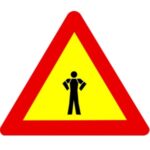 In a safety check people can use a score from 1 to 5. The scoring is done anonymously. A score of 5 means that they feel that they will be fully open and honest in the meeting and are willing to talk about anything,where a 1 means that they don’t feel safe at all and don’t want to speak up:

I prefer to write the scores down on a whiteboard or flip over, showing how many people gave which score. For an online meetup, I use sli.do to collect and visualize the scores (again anonymously)

What if people don’t feel safe?

If there are multiple low scores then I’ll check with the team on how to proceed, since there’s a big chance that people won’t speak up. Often that becomes the topic of the retrospective, as having low psychological safety in the team is something that can seriously hamper collaboration and team results.

If safety is low then it can be helpful to (re-)explain the purpose of the retrospective and make clear to the team members that whatever is discussed in the meeting stays within the team. I also recommend to use the prime directive to make people aware that the purpose of the retrospective is to learn, so we start from the assumption that everyone did the best they could do given what they knew at that point in time and the situation at hand.

If there’s only one low score then I will tell the team that there is one person that doesn’t feel safe. Usually there is not much what you can do as facilitator than respecting the score and stay aware and focused on any signals of unsafety (since it anonymous you don’t know who feels unsafe).

You can do a new voting after talking about safety with the team, to see if that will change the scores. I usually ask people if they would like to revise their score, if not then I don’t do a new voting as it might make the situation only worse.

If the level of safety is low then you can consider to change the exercise planned for the retrospective. A constellation (described in the book Getting Value out of Agile Retrospectives) can be a suitable exercise, since initially people don’t need to speak. Another exercises would be teams kudos where you ask people to speak up about how they received help from other team members – completely different from from what people are used to and something that most people will feel safe to do.

Never ever ignore signals of unsafety, regardless if they become clear at the start of the retrospective or during the meeting. If you somebody becoming silent, try to involve them into the meeting. If you get the feeling that somebody isn’t open or honest, state your feelings and check them with the person that ism giving you those feelings. If they say that they feel safe, then it’s ok, so you can continue with the retrospective. If not, then can check what is making him/her feel unsafe, and what the group or you as a facilitator can do to make him/her feel safe again.

How do you deal with safety in retrospectives?

If you want to explore psychological saferty in your team, the Psychological Safety Cards can be used.  The deck provides a profound and extensive set of phrases that cover many aspects of psychological safety from an individual, team, and organizational perspective.