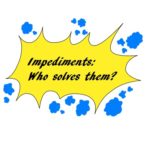 Who should be handling and solving impediments? Should it be the Scrum master? The team as a whole! Their agile coach?

I prefer that team members recognize and solve impediments themselves. For most of them they don’t need a Scrum master or coach. So if they see a problem, I expect team members to take action and solve it.

With the above (slightly provocative) question I started a discussion in the Scrum Master Community on Facebook. And boy, did it take off. Within minutes many people reacted and we had a great discussion! A big thanks to Alexey Krivitsky, Luis Gonçalves, Douwe Attema, Michael Leber, Gitte Klitgaard, Sjoperd de Vries, Angel Medinilla and many others who reacted. I’m impressed by the thoughts and insights that you shared.

Back to how I feel about Scrum masters solving impediments. Agile teams need to be able to handle impediments. I often see teams where the Scrum masters are overloaded with the many things that they have to do. Before they can solve an impediment another one pops up requesting their immediate attention.

But when the Scrum master is away, things stall. Teams skip rituals and don’t recognize or sometimes ignore problems and get stuck.

At one time I had a chat with an IT manager from a large company. He mentioned how proud he was about his Scrum masters. “Whenever there’s an impediment, they will pick it up and solve it relentlessly” he said. “They are always helping teams by solving problems and driving them forward.”

But he also mentioned that it surprised him that when the Scrum master was away for one or two days, teams didn’t do a daily stand-up. And when there was a problem, teams often got stuck.

I asked him if their might be a connection. If teams are so used to having a Scrum master which solves all of their problems, why should team members bother to learn ways to solve problems themselves?

This is where Agile coaching comes in. When I work with organizations I help teams and managers to see patterns of apathy, and help them to find ways to deal with them.

Leading the team and solving impediments is a full day job for their Scrum masters. Although they are good at it, it is driving them mad (I talked with several Scrum masters from that company who confirmed this to me). Switching between all the different things that are asking for attention doesn’t feel very effective. In fact, it’s hard for them to get anything done at all.

The Scrum guide suggests that “The Scrum Master serves the Development Team in several ways, including […] removing impediments to the Development Team’s progress”. Although the Scrum master can certainly play an role when it comes to dealing with impediments, my opinion is that handling problems is a responsibility for the whole team and not only for the Scrum master.

I like team members to be the ones who solve problems, in stead of having a Scrum master doing it. There’s value in the Scrum master helping the team to find ways, and be an example, but it should be about teaching people how to fish in stead of feeding them.

Some of the main reasons to involve team members when dealing with impediments are:

So before setting out an expectation that the Scrum master should be the one who solves all impediments, think about the implications. You do not want the Scrum master to be a bottle neck for the team. Self organizing means that the team as a whole is capable to deal with impediments. Find a solution that helps them to proceed, and do what is needed to get the job done.

My advice: Prevent that the Scrum master becomes overloaded with solving impediments, by involving team members when looking for solutions. Scrum masters should coach teams in finding ways to work together, and using the individual strengths of the team members, also when solving impediments. In this way the team can really be effective and do magic.

In my opinion very mature team probably don’t need a Scrum master role anymore. This is also why I don’t believe in full time Scrum masters. We have to prevent Scrum masters from becoming overhead, keep the role valuable, up to the point that a team has developed enough capabilities to self organize.