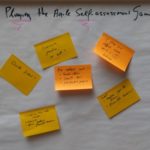 With the Agile Self-assessment Game teams can discover how agile they are and what they can do to increase their agility to deliver more value to their customers and stakeholders.

I played the Agile Self-assessment game with two teams in a session at the Retrospectives Facilitators Gathering 2017 and discussed the game with several attendees. Below are the ideas that came up for playing the game and for improving it.

A first suggestion that came up was to use Diana Larsen’s circles and soup as a playground for the game. Players can put a card in one of the circles “team controls”, “team influences”, or “soup”, depending on how they feel that a team can deal or cannot deal with the practice mentioned on the card.

A dimension that builds on top of that is using a matrix of circles and soup and self-assessment of how well practices are working out. One team played this format where attendees self-assessed a team that they are working with by selecting practice cards and placing them in this matrix. This triggered several discussions, like why they felt that improving practices was within or outside the control of the team, what could be done to gain influence or control, and what could be done to improve the practice.

Another suggestion that came up (actually in both teams) was to rank cards based on the expected value that they can bring to a team. Where estimating the value of a practice can be hard, teams often find it easier to rank practices on value. Ranking reveals the most valuable practices that teams can work on to improve their agility and deliver more value.

One team suggested the game to be played in parallel by one team consisting of executives and another consisting of practitioners, and then combine the results. Seeing where they agree and where there are different insights can lead to useful discussions between them.

Another idea is to do a kind of poker game, where players can keep cards or exchange them with cards on the stack or cards that have been played by other players. It would bring a competitive element into playing the game, which might foster valuable discussions.

Teams can also arrange the practice cards on a matrix with the two dimensions “importance” and “fulfillment”, and then select cards from the ones with high importance and low fulfillment to work on.

In some situations, it might be more effective to reduce options and play with fewer cards. Suggestions that came up are to pick a central idea and select cards that support that idea, focus on a specific topic and select cards related to that, or to have the Scrum master or game facilitator pre-select cards based on what the team would need to work on as part of the game preparation.

The idea popped up to bring Appreciative Inquire into the game. Players would raise cards with practices that are going well in the team and then think about how to improve even further or use those practices to solve a problem that the team is dealing with.

Next to discovering new ideas to play the game I also looked for ways to improve the game. This is what came up during the week.

One improvement suggestion is to number the cards. That will make it easier to explore similarities and differences when the game is played with multiple teams.

Another improvement is to create double-sided cards, where additional information can be put on the backside of the card.

Powerful questions can also be used to further improve or extend the game. Although the format of questions differs from the statement level used in the game, they can still be used to come up with additional statements or refine the existing ones.

Currently, there are cards with statements that focus on outcomes while other cards mention practices. There’s value in both of them, it can be interesting to classify the cards and see what is covered and where there are gaps. 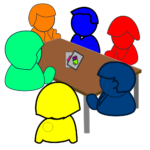 The Agile Self-Assessment Game can be used by teams and organizations to self-assess their agility. You can order the game from my webshop. The full game (cards, instructions, supporting materials and extensions) is licensed under a Creative Commons Attribution-NonCommercial-NoDerivs 3.0 Unported License.