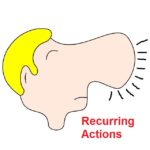 When the same actions keep coming back in every retrospective, that’s a smell that something is going wrong. In this fourth article in the series Retrospective Smells I’ll explore what might cause recurring actions in retrospectives and what you can do to solve it.

Often it’s easy to recognize that the same actions keep coming back. When you are the one who usually facilitates the retrospective (as the team’s Scrum master or as an external facilitator) then you will probably see the pattern of repeating actions in consecutive retrospectives.

You might also hear team members complain that the action that the team agrees on was already mentioned in an earlier retrospective. They might say things like “we had the same action before” or “we agreed to do something about it but that didn’t happen”.

Sometimes it’s a little more subtle. For instance when it’s similar kinds of actions that pop up which are not exactly the same. For instance when every retrospective ends with something that needs to be brought up to management. Or that every retrospective is about a lack of process, and the action is to define a process for doing something. The pattern is there, the team is not really improving hence similar problem keeps coming back. 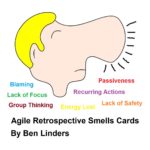 This coaching card deck includes a card about Recurring Actions as described in this post.

Often the deeper problem behind recurring actions is that somehow actions don’t get done or aren’t effective. If they would, then problems that call for the same action wouldn’t be happening over and over again.

The things that you can do to deal with recurring actions are:

In my series on Retrospective Smells, I’ll provide tips for recognizing smells and suggestions for dealing with them.

Which retrospective smells have you seen and how did you deal with them?