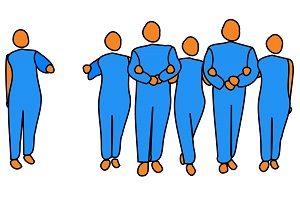 I recently received a question whether the Product Owner should participate in agile retrospectives. An interesting discussion took off about how “it should be by the book” and “common sense” which I have summarized in the below blog post.

The question if the product should participate in retrospectives was asked by a participant in a training from Erik Philippus (author of the guest blog post ervaringen met Agile en Scrum certificeringen and the overview of Agile / Scrum Certification) when preparing for his exam to become a Professional Scrum Master. The exam question asked if the Product Owner should participate in Sprint Retrospectives. Possible answers were that it was optional (if invited by the Scrum Master), mandatory (the retrospective is an opportunity for the Scrum team to assess themselves and improve) or not allowed (the retrospective is there for the development team).

Whether or not a Product Owner should participate in the retrospective

Erik’s reaction to my answer was:

I think the same about this, and in practice it is usually the case that the Product Owner attends the Retrospective. Makes sense.

Good, then we solved this? Well, almost. The rest of his response:

What do “the books” tell us?

The Scrum Guide states that the retrospective is intended for the Scrum team. The Scrum team includes the Product Owner:

The Sprint Retrospective is an opportunity for the Scrum Team to inspect itself and create a plan for improvements to be enacted during the next Sprint.

This is consistent with the second answer of the exam question which stated that the retrospective is intended for the entire Scrum team, and it closes out the third answer (only the development team) clearly.

Erik showed me a text from the Scrum Primer, which says that the presence of the Product Owner at the agile retrospective is optional:

Summary: Inspection and adaption related to the process and environment.
Participants: Team, ScrumMaster, Product Owner (optional). Other stakeholders may be invited by the Team, but are not otherwise allowed to attend.
Duration: Timeboxed to 45 minutes per week of Sprint.

This suggests that the Product Owner may participate in the retrospective, but it is not required to be there. Whether the team has to invite him / her or if the Product Owner can decide whether to take part or not is not clearly described in the Scrum Primer.

Sometimes the ScrumMaster can act as an effective facilitator for the Retrospective, but it may be better to find a neutral outsider to facilitate the meeting; a good approach is for ScrumMasters to facilitate each others’ retrospectives, which enables cross-pollination among Teams.

This is something that I fully support, it’s important to assure that retrospectives are well facilitated!

Do what works for you!

As often with models and frameworks, multiple interpretations are possible. The healthy common sense from Erik and me tells us that we want to have the Product Owner in the agile retrospective. Fortunately in practice that is often the case, although there are teams that just need a little push to invite the Product Owner to the retrospective. Hence this blog post :-).

In the workshop Valuable Agile Retrospectives you will learn how to apply retrospectives effectively in your own organization. You will experience how to get the whole team involved to define improvement actions that will contribute to the goals and results of your organization.