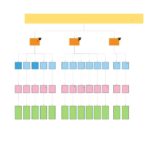 Agile assumes small self-organizing cross-functional teams that can make all decisions within the team. But, Agile does not tell us how such teams get created and attain the state of self organization. Possibly, it’s left out of the agile literature because it is too complex and would vary for each team and so it is hard to be very prescriptive. However, it is important that each team that is trying to adopt agile takes a serious look into this.

Currently large software companies are structured in a way that allows for cross functional teamwork only at higher levels in the hierarchy. The team members executing the projects are often at lower levels of hierarchy in the organization chart where they work isolated from other functions. Any decision that requires cross functional team work then needs to bubble up the org structure; the decision needs to be made; and then the decision needs to trickle down.

The current process deployed in these large companies assumes this organization structure and works with it. Sometimes, when trying to adopt agile, teams ignore the cross functional aspect of the scrum team and faces some expectation mismatch downstream.

Some companies create the cross functional project teams when they start adopting Scrum without undertaking any other organizational or people management process changes. This is done partly because of the local problem solving mindset with which agile is adopted.

The call here is: do not sidestep this issue. It is important to take up this issue head on, analyze the current organization and culture, set attainable goals, and make a deliberate decision.

The role of the functional manager

The role of the manager is not well defined in Scrum. Large software companies using traditional project management had big roles for the functional managers in projects (in addition to the people management role).

It is important to have an open discussion at the onset to reduce uncertainties during the transition.

Note: A longer version of this blog is available at the Wizergos Blog.

Organizing for self organization

Thank you Shibabrata Mondal for sharing your insights and ideas on how agile impacts the organizational structure and the role of the functional manager in this guest blog post.

My (Ben Linders) opinion is that to truly adopt agile in a larger organization the culture and structure needs to change.

Agile teams are self organized.  Teams are empowered and able to decide what to do and how to do it. They don’t need managers to decide for them, which means that the way your organization is structured and managed will have  to change when you adopt agile.

In many organizations, “command and control” management is a common practice when they start implementing agile practices. Coaching a team to become self organized can be a challenge for Scrum masters, but it is key to make agile succeed.

To make an agile transition successful, agile has to be adopted at the top. The mindset and culture has to change to enable agile adoption in the whole organization. We need agile thinking managers.