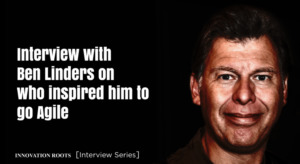 I have been interviewed by Noopur Pathak for Innovation Roots about how I collaborated with my customer on my first project, doing agile when the Agile Manifesto wasn’t invented yet, and later got more inspired by agile.

Read full the interview here: Interview with Ben Linders on who inspired him to go Agile.

I do a lot of interviews for InfoQ, now it was the other way around:

I first saw Ben Linders on Twitter being quite active and responsive. I then chanced upon his blog and was overwhelmed to see myriad of topics that he has covered. One interesting thing I found out that we have one thing in common, we interview people. I decided to learn from his experiences and bring it for our audience, and here it is.

In the interview I told about how I delivered my first project in increments, and collaborated with my customer:

The team and I divided the functionality into increments. In the first increment we addressed one of the main risks and delivered core functionality. We excluded everything else to focus on the main problem and were able to deliver a piece of software running on a PC (the application was embedded software for a CNC Milling machine).

Our customer was happily surprised when we showed him the software. The next day he called us, and told us that he had tried it and found out that worked well, except for one situation. Going through the failure on the phone we immediately understood the problem, and agreed that it would be solved in the next increment.

I’m the fourth person to be interviewed in their series, after they interviewed Alistair Cockburn, Dov Tsal, and Jurgen Appelo. Happy to be part of this line-up of influential agile people 🙂