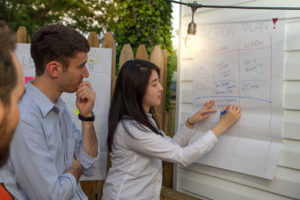 Earlier this year I met David Horowitz at the Retrospective Facilitators Gathering, a yearly event where people exchange their experiences with Agile Retrospectives. We had some great discussions about increasing the value with continuous agile retrospectives and which exercises you can use with co-located and distributed teams. And we agreed that David would write a guest blog post for benlinders.com :-).

David is the CEO and Co-Founder of Retrium who recently released a first version of their retrospectives tool. In his guest blog post he explores how you can use agile retrospectives for continuous sustainable improvement.

I’d like to start by asking you two questions:

Think about those two answers for a moment. Is it even possible to achieve continuous improvement if you only run a retrospective at a certain predefined interval? Doesn’t the word “continuous” require a nonstop, unending process?

An Alternative to the Sprint Retrospective

At this point, you might ask yourself: why do we need to run a “continuous” retrospective? Isn’t once every few weeks enough? To which I’d reply: what does your team do today if it identifies a pain point early on in a sprint? Does it immediately try to fix it? Or does it wait until the end of the iteration to give it attention?

If your team is like most, it probably did the latter. And think of all the time wasted! Imagine if you came up with your idea for improvement on the first day of a new 2-week sprint. How much time could you have saved by raising the issue immediately rather than waiting a few weeks for the scheduled retrospective? That’s where the idea of a continuous retrospective comes in.

How to Run a Continuous Retrospective

By continuous, I certainly don’t mean to imply that your team should constantly be sitting in a room running Lean Coffee or 4L. Instead, continuous retrospectives rely on different techniques to be effective.

The one I like the most is through the use of a modified kanban board. Take a prominent spot on your team’s wall and put up the columns: Ideas, Doing, Done. Whenever you have an idea for improvement, immediately write it down on a sticky note and put it in the “Ideas” column of your board for everyone on your team to see. If you want, write your name down so people will know whose idea it was.

If you’re confident in your idea and want to start working on it right away, immediately move it to the “Doing” column. More likely, you will want to get some feedback from your team before trying to work on it yourself. If that’s the case, use the Daily Scrum to mention your idea to your team and ask anyone who is interested for a breakout session after the Daily Scrum is over. If it’s a good idea, people will jump at the chance.

David Horowitz is the CEO and Co-Founder of Retrium, a tool that makes retrospectives for distributed teams easy and effective. It implements a number of the most popular retrospective techniques, including 4Ls, Mad Sad Glad, and Start Stop Continue.

The Why and How of Agile Retrospectives