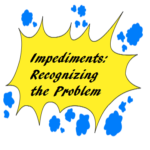 This second post in the series on handling impediments builds on the process described in Handling Impediments: Why it Matters! I’ll dive into the first step: recognizing the problem.

Recognizing that there is a problem is the first step. Often there is only a signal, so you have to be a good listener to pick it up. Some examples of signals, which are usually a symptom of a deeper problem, that you can hear on the work floor are:

Do they sound familiar? When I teach teams to become more effective in handling impediments I see a lot of recognition in the classroom (there’s been several times where somebody stated that they heard something similar yesterday at work). Signals like this can be heard, and when you hear them you need to deal with them.

Sometimes I meet people that do not want to hear bad news. “I hired to solve problems, not to bring them up!” is what I have heard people (often managers) say. Ignoring problems doesn’t make them go away. Some problems can be solved by the team itself, for other problems they will need the help of their manager.

There has to be a mindset in the organization where “having a problem is not a problem”. If there’s a problem, when would you like to know? Usually as soon as possible, to limit potential damage. Solving problems before they go out of hand is usually also cheaper 🙂

People should not be blamed when they bring up problems. So don’t shoot the messenger! At one conference a presenter stated that “at our company we never shoot the messenger, unless (s)he is late ;-)”. Even in that case I would not shoot them, but you may want to do a root cause analysis to find out what took them so long…

Summing up, if you want to deal with impediments then make sure to keep your ears and eyes open to catch any signals that are there. Make it very clear that people can come to you if something is bothering them or when they see a problem.

In the next blog post I will dive into analyzing and understanding impediments. Stay tuned!