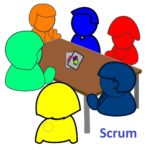 The 2017 Scrum Guide was announced in a webinar with Ken Schwaber and Jeff Sutherland, authors of the Scrum Guide and co-creators of Scrum. I interviewed Ken and Jeff for InfoQ where I asked them what has been changed and why:

Ken Schwaber: There are five main changes to The Scrum Guide: a greater definition on the uses of Scrum, a more refined definition of the role of Scrum Master, clearer understanding of the Daily Scrum as a vehicle for inspection and adaption to ensure progress toward the Sprint Goal, the establishment of a maximum length to time boxing and updating the Sprint Backlog to include feedback from the Sprint Retrospectives. That said, all of these changes serve the same purpose, which is to clear up misconceptions about Scrum.

Jeff Sutherland: All updates to the Scrum Guide were recommended by the Scrum Community to make the wording of the guide clearer and more helpful to Scrum Masters.

The number of cards in the Scrum Expansion Pack version 2.0 has increased from 13 to 39. The existing cards were checked against the new version of the Scrum Guide and updated where needed. The cards cover all principles, practices, and guidelines described in the Scrum Guide.

The Scrum Expansion Pack should be used together with the Agile Self-Assessment Game by teams and organizations to self-assess their Scrum culture and practices. Both products (PDF files) can be downloaded from my webshop:

Customers who have bought an earlier version of the Scrum Expansion Pack are entitled to a free update. I will personally inform them about the upgrade of their cards.