When organizations set up their agile teams, a question arises who should become the Scrum master? Could it be a former project or line manager who will take up the role and act as a servant leader for the team? Or could one of the team members also do the Scrum master activities, next to the technical work. My preference is the second option: Let the Scrum master come from the team.

The Scrum master is a servant leader that helps the team to do their work, with primary focus on the process, the way of working. Scrum masters facilitate agile activities such as the daily stand-up and retrospective. They will also protect the team from external disturbances to have the team working in a sustainable pace.

In some organizations, the project managers become the scrum masters when they adopt agile. They get a training in agile and scrum and on how to be a scrum master, and then things take off. I’ve seen this work, and spoken with former project managers who like to work as a servant leader for scrum teams. But I have also seen many project managers that keep doing a “command and control” style of leading in their new role as scrum master. Which is not a surprise, because by using these skills they have become an excellent project manager. The project managers may not be aware of how they are steering the team, but the team members are, which can lead to resistance when implementing agile!  Scrum puts more emphasis on collaboration and communication, and empowered employees, and that asks for a different style of team leading.

This doesn’t mean that you fire your project managers. An agile organization often still needs projects managers, but the role of project managers changes when an organisation wants to become agile. I have seen project managers do great things in arranging the works environment and conditions for teams. Most of them also have skills and expertise that they can use to solve impediments, which serves the team in doing their work.

My preference is that (technical) team members take the Scrum master role, in stead of former project managers. They can do it next to their regular activities. Acceptance by the team is often higher, since they can “elect” their own scrum master. It can even be a rotating role, where different team members are scrum masters for consecutive sprints. As mentioned earlier, the project leader can help the team to solve impediments, but should not be commanding the team. 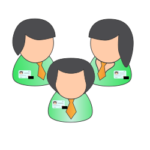 Every team that I have worked with had team members who possessed the skills needed to do the scrum master role, if you observe and watch a team, and talk with the team members, then you can see them. I have had several teams where people asked if they could do the scrum master role, they felt a natural urge to help and support the team, and help them to move forward.

A new Scrum master can be coached in his/her role, to learn how to do it effectively and in a limited amount of time (it’s a part time role). Agile coaches can help them, and the team as a whole, to collaborate and find great ways to become a self-steering agile team.

What do you think: Should the Scrum master come from the team, or should it be (former) project managers?