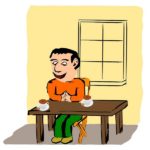 To be able to coach people you need to connect with them and establish a relationship. They have to be willing to accept your help, or even better ask for help so that you can coach them. Making yourself visible and available for people and showing that you prepared to help them can lead to being asked for help more often.

This is a story of how I coach people by “just being there”. It describes how I worked with a customers to improve the interworking and communication between people working in different departments.

A coach can help people and teams to self-assess how agile they are and support them in becoming more agile and lean. But you can only coach people if they want to be coached. They need to be willing to accept your help, advice and suggestions to deal with situations. As a coach you need to be asked to help. Enforcing yourself to people doesn’t work. You can’t change people, people can only change themselves. As a coach you can help them to change, but only if they want help.

Not asking for help

Sooner or later every coach gets into a situation where things are going wrong and nobody is asking him or her for help. People know that there is a problem but they insist on solving it themselves. As time goes by it becomes clear that they are not able to solve it. The problem get worse and still they are not asking for help. Which makes it even more difficult to solve the problem.

For an organization it’s a nightmare. Things are getting out of control and nobody seems to do something about is. Managers will step in, but chances are big that it makes things even worse as they don’t know the details of the problem and people will object to their interference. The managers start wondering why the coach isn’t doing anything to solve it.

For a coach this is very frustrating. You recognize the situation and know several solutions that might solve. Should you step in and give advice without being asked? Most often that doesn’t work, as people will resist and tell you that they want to solve the problem themselves and don’t need your help. But as a coach you cannot and should not be a bystander watching how the problem becomes bigger and bigger

What can you do as a coach to have people ask you for help? Sometimes the only thing you have to do is just be there and establish a relationship with the people before problems start escalating.

A desk in every department

When I was working in a department I connected with the people working there as much as possible. I showed genuine interest in their work. Asked them occasionally how things are going. Drank coffee with them and went to lunch or joined their walk. Enjoyed their jokes and threw in some of mine.

I took care to not disturb the things people where doing or interfere with their work. If people were busy I didn’t ask for their time. It was clear to them that I was there and that it was up to them to approach me whenever they wanted. I was there for them to help in any way I could. Any time, any place.

Sitting in their office people start talking to me. It could be chat about the weather or yesterdays football match (I have to admit that I’m not a sports fan however), something that happened in the news, their frustration about being stuck in the daily traffic jam or something great that happened to them at home.

People asked me why I was sitting in their department and what I was doing there. That provided an opportunity for me to tell about my assignment and myself. I told them why I was there and why it could be valuable for people in different departments to collaborate more. I explained how I was there to help them and that’s it’s up to them to make usage of me being there.

After some time people started asking questions related to their work. They came to me with a problem that they had and asked me if I had any suggestions how to deal with it. I shared my ideas and experiences on the subject, but made it very clear that it’s up to them to decide what to do or how to do it. And also that they could drop in anytime if they wanted to discuss something or needed some help. I was there for them.

Once people knew where I was sitting on which days (my schedule was written down on the whiteboards in all departments) they started to come over more often. I picked a visible spots in every department so people couldn’t miss me. They would see me when they came in, went to the coffee machine, or when they stood up and looked around. Most of them like coffee, so often we would get a cup and sit together. Or take a short walk and talk. If there were bigger issues we would schedule time to work on them, either one-or-one or in teams.

I helped people to meet up with and get to know people in other departments. To start discussing a topic with somebody outside their department. Follow up on things which crossed department borders. Getting things done together. At many instances bringing people from different departments together as a coach really helped to make the connection and ignite collaborating. At times I connected people in the same department who didn’t know that they were working on similar issues. People talked to me and I helped them to find other people that could help them in solving their problems.

Getting asked for help

I actually had most people stopping by in the early morning, before they went into meetings. They discussed how things went, what was bothering them, what was on their mind. I could give them ideas and suggestions that they could use in their meeting.

Sometimes they came by to chat during lunch or at the end of the day (I worked longer days to be more visible and available for them) to discuss how things had gone. Together we reflected and learned what had worked for them or where things didn’t go as expected. It made it possible for me to advice people and provide hand-on suggestions on how to do things.

Being there, clearly visible and available, provided many opportunities for me as a coach to support people. It lowered the barrier for people to ask for help. Made it possible to coach people on the spot. Join meetings, discussions or anything else that happened in the department and help teams to collaborate and come to agreements on how to deal with issues. It’s a effective and valuable way to coach people and teams.

You can coach a lot by just being there, being available for people, and helping them on a daily base with small things! Many small steps will lead to a gigantic journey of continuous improvement.

I want to thank Len Lagestee for writing the great blog post my favorite coaching technique. It triggered me to write down my experiences with coaching people by just being there. Thanks Len!