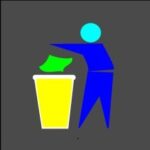 Here’s an example of a team that I worked with which had way too many actions and wasn’t making progress with the actions. Their backlog of actions became bigger and bigger. I did a retrospective with them where I focused on reducing their action list:

I started this retrospective by checking the progress of their actions, where I asked them to be explicit on what has changed. They had been so busy in the iteration that they didn’t spend time on the actions. They had looked at the list of actions several times, but it was so big that they felt they needed at least a couple of days to work on them. Time they felt they didn’t have in the iteration. So they didn’t do even one action.

Admitting and discussion this, they became aware of the problems they had:

We discussed some of the actions that they considered most important (using dot voting to have them decide and focus), and then redefined them to have two doable actions for the next iteration. In the next iteration they managed to complete one action, which was celebrated in the retrospective.

Less is More! Together with the team I managed to bring the number of actions down which helped them to get actions done. I did this by:

In the Vital Few Actions retrospective exercise I described what team can do to “destroy” actions, get rid of actions when they have too many of them. This exercise is listed in the Retrospectives Exercises Toolbox, a collection of great exercises that you can use to design your own Valuable Agile Retrospective.

It’s why over how, actions are there to improve, and to do that you only need a few good actions. Long lists of actions do not help you, actually, they make things worse.The team decided that having few high quality actions from the retrospective is their preferred way of working, now they have seen that not making progress with actions was one of their biggest problem. Their success criteria of a retrospective is to come out with fewer but better actions!

I’m giving several workshops that help teams and organizations to improve the way that they do retrospectives:

You can join one of my upcoming workshops or contact me to have a workshop in your country.