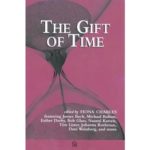 The book The Gift of Time gives an impression of how various consultants have used ideas from Jerry Weinberg to support organizations going through change. It’s a book with seventeen inspiring stories, collected by Fiona Charles, to celebrate the 75th anniversary of Jerry Weinberg.

Jerry Weinberg was a well-known author and consultant, he gave workshops on leadership, advisory skills, and writing. In his book from 1971 The Psychology of Computer Programming he described his vision of software development, which is mainly focused on the human aspects. With that, he distinguished himself from the mainly technical books that existed at that time.

Many of Jerry’s books and articles deal with human problems and this is also a recurring theme in The Gift of Time.

An example is the contribution of Michael Bolton in the book. He mentions a question that Jerry often uses, “compared to what”, making you aware that all things are relative. You have to talk to your customer to find out what he really needs, and ask why instead of assuming that there is only “an appropriate solution” or “the best way”.

Another example is the contribution “Congruent Feedback” described by Esther Derby (author of Agile Retrospectives: Making good teams great). She describes how Jerry helps people to become aware of incongruity between what they say and do, and how they can use it to get a deeper understanding of problems and come up with better solutions.

Changing organizations means changing the behavior of people, and The Gift of Time contains various articles on this subject. For instance the contribution of Juda Mogilensky about behavior and process improvement, which describes behavioral patterns at the different CMMI maturity level of IT organization. Recognizing these patterns helps to get a better understanding of an organization, with which better advice can be given that organizations are able to actually implement.

What I learned from Jerry Weinberg

Jerry has the talent to discover what people do, how they do it, and to show them how they can help people with whom they work together. At the same time, he makes you aware of things that you can improve yourself to deliver even more value.

I met Jerry for the first time at the Software Management / Applications of Software Measurement (SM/ASM) in 2002 at the Disneyland Resort in Anaheim California where I attended his Consultant’s Consulting Clinic. I was particularly impressed by how he showed me what and how I contribute to the organizations and the people I work with. By asking questions and giving feedback I help people think about their way of working This was something they seldom did, unless I triggered it and facilitated to do it.

In 2007 I attended the Amplify your Effectiveness conference in Phoenix Arizona. This is not your regular conference; there are no powerpoint presentations but instead your actually doing things and learning a lot from the session hosts and from the attendees. A lifetime experience, where one of the sessions that I attended was on congruence by Jerry Weinberg. I learned how to explore situations and be aware that there might be something smelling, and what I can do when things don’t seem to go the way that you expected them to go.

Over the years I have used many techniques that I learned from Jerry, and I have improved myself in how to apply them. I use many different reflection techniques to enable and drive continuous improvement with small but valuable steps. A moment of reflection can be a short conversation at the coffee machine, a “daily stand-up” of an agile team, an agile retrospective at the end of an iteration, or an audit, CMMI Assessment, assessment game, or root cause analysis, depending on the situation and context.

In 2015 in did an interview with Jerry Weinberg for InfoQ on his book Agile Impressions. I asked him about how business people and developers working well together can look:

Do they know each other’s names? They don’t need to be best buddies, but they must treat each other with respect. When they’re meeting together, do most questions get answered? The answers don’t have to be what the questioner wanted to hear, but are their questions responded to, not ignored? Those are the signs I see most often that two parties are not working well together.

One other kind of sign is not seen by watching them work, but whether or not they will openly discuss how well they’re working together. Complaining to outsiders (such as managers or consultants) is a clear indication that they’re not working well together.

Jerry Weinberg helped me to look at my way of working, to provide more value to the people I work with. His inspiration helped me to become a better person. Thank you Jerry!

Many people have been influenced by Jerry’s ideas, and Fiona Charles has created an interesting and challenging selection of stories. The diversity of the stories in the book makes it clear that Jerry’s ideas can be used in many ways. The authors describe in their stories how Jerry helped them to make a difference, and this book can help you to do the same.

It is an inspiring book, and I am sure that the stories will help you to look at things from a new angle, and discover ways to improve yourself and deliver more value to the people you work with.

Jerry Weinberg has passed away on August 7. With the help from Sue Petersen, Don Gray, Fiona Charles, and Danny Faught, I wrote the news item Author, Teacher, and Consultant Jerry Weinberg Passed Away on InfoQ to honor him and share his legacy:

I’ve been writing for InfoQ since 2012 and this has turned out to be my 500th news item on InfoQ. I never planned that item to be something that is so special and close to my heart as it has turned out to be. It would probably have been just be another Q&A or summary on InfoQ from me. Well, it certainly isn’t.

We all wanted Jerry to live forever. With this InfoQ news item, I want to honor Jerry and share his legacy with the world. It being the 500th item makes it even more special for me.

This blog is partly based on the Dutch posting Inspiratie van Jerry Weinberg: The Gift of Time that I wrote in 2012. I revised it and extended it with some of my personal memories from Jerry and the things I learned from him. Together with the book and other books from him, this is a great legacy from Jerry that is worthwhile to take forward.