Starting an IT improvement program can be difficult. The Capability Maturity Model – Integration (CMMI) supports organizations in planning and implementing process driven improvements. The staged representation, that uses maturity levels for improvement, usually requires a large investment, and longer time before improvement become visible. The CMMI Roadmaps are an alternative approach, which delivers quicker and long lasting process improvement results. 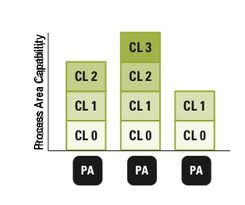 Each roadmap contains a limited set of four to eight process areas, which limits the scope and duration of the first improvement cycle(s) and helps organizations to focus their improvement activities on the critical few process areas that are most likely to provide direct business benefits to their situation. For each process area, the capability level is used as an indicator of the organizational performance for the processes. Since each organization is unique, the improvement goals and problems to solve first are different for each organization.

After finishing its implementation of a roadmap, the organization will generally have enough experience with process improvement in general and with CMMI in particular to define the next steps themselves. However, hints are given to suggest likely follow-on process areas.

Where do CMMI Roadmaps originate from?

In the 20th century, I have been involved in several process improvement programs based upon the CMM (the predecessor of the CMMI). These programs implemented improvements across all process areas up to a specific CMM level (usually CMM level 2 or 3). Given the size and complexity of these improvement programs they are done by a team of process experts and change agents in medium to large organizations. During the time I was working with CMM, there were several requests for smaller but significant improvement projects, that would focus upon specifics processes and/or parts of the software development process. I experimented with improvement projects that used only some of the Key Process Areas (as there were called in the CMM), to discover that this was a viable and beneficial way to do improvements.

In 2000-2001 I lead a CMMI assessment program that covered several departments within a larger organization. Given the different needs of these departments we decided to do business focused assessments, each one comprising only some process areas. These assessment were also pilots of the CMMI that was recently released, and of the new SCAMPI method for CMMI assessments. The assessments showed to be very effective, resulting in actions that could be taken up by the departments, with strong management commitment. 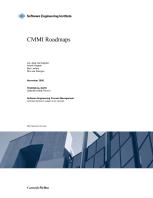 While discussing my assessment approach I found out that there were several other process improvement experts in the Netherlands who had done similar things with the CMM(I). So we decide to exchange our experiences, learn from each other, and share our thoughts on deploying the CMMI in a Business Focused way. We (Jan Jaap Cannegieter, André Heijstek, Rini van Solingen and myself) discussed our ideas within the Dutch Software Process Improvement (SPIder) network, which convened a workshop in November 2006 to get feedback from the process improvement community in the Netherlands. The results of all of this resulted in the CMMI Roadmaps Technical Note, which has been published by the Software Engineering Institute.

CMMI Roadmaps have been deployed for process improvement since publication. Additional up-to-date support for CMMI Deployment is published on the CMMI V1.3 Process Areas page (in the Tools section).

The deployment approach from the CMMI Roadmaps is also used in the People CMM roadmap for implementing agile. This roadmap helps organizations to establish and improve their workforce, and assure that the right conditions are established for Agile teams to excel their performance.

The CMMI V1.3 that was released in october 2010 includes support to combine process areas from the Acquisition, Development and Services models. Several roadmaps are described for the CMMI V1.3:

Currently there are several P-CMM roadmaps under development by the SPIder P-CMM workgroup. These roadmaps focus upon current Management and HRM themes for managing workforces, like “building a mature workforce”, and “culture and behavior change”.